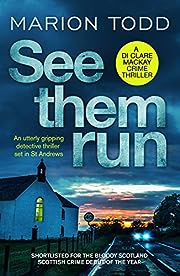 In a famous Scottish town, someone is bent on murder – but why?
On the night of a wedding celebration, one guest meets a grisly end when he’s killed in a hit-and-run. A card bearing the number ‘5’ has been placed on the victim’s chest. DI Clare Mackay, who recently moved from Glasgow to join the St Andrews force, leads the investigation. The following night another victim is struck down and a number ‘4’ card is at the scene. Clare and her team realise they’re against the clock to find a killer stalking the streets of the picturesque Scottish town and bent on carrying out three more murders.

To prevent further deaths, the police have to uncover the link between the victims. But those involved have a lot more at stake than first meets the eye. If Clare wants to solve the case she must face her own past and discover the deepest secrets of the victims – and the killer. 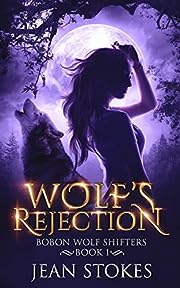 I made a mistake once and it cost me my pack and nearly my life.

Though I sometimes feel that would have been preferable. Because I can’t find anywhere else I belong, no matter how much I want to.

It doesn’t help the sexy Alpha of my new pack hated me at first sight. I’ll be lucky if he doesn’t kill me himself. He’s restless and angry, but I don’t think it’s just because of my presence. Even I can see he isn’t happy with the pack’s arrangement for him to marry Georgie.

Beau and Georgie’s marriage isn’t my problem, though. My problem is someone is trying to kill me. I have suspicions about who, but I can’t figure out their motive.

The last thing I want is to work with him, but is it possible Beau and I could help each other…

…or would our alliance result in more bloodshed? 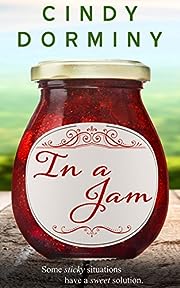 Andie Carson has to do three things to inherit her grandmother’s lottery winnings—sober up, spend a month running her grandmother’s Georgia coffee shop, and enter homemade jam in the county fair. If she can’t meet those terms, the money goes to the church, and Andie gets nothing. She figures her tasks will be easy enough, and once she completes them, Andie plans to sell the shop, take the money, and run back to Boston.

After a rough breakup from his crazy ex-fiancée, Officer Gunnar Wills decides to take a hiatus from women. All he wants is to help make his small town thrive the way it did when he was a kid. But when wild and beautiful Andie shows up, Gunnar’s hesitant heart begins to flutter.

Gunnar knows that Andie plans to leave, but he’s hoping to change her mind, fearful that if her coffee shop closes, Main Street will fold to the big-box corporations and forever change the landscape of his quaint community. But convincing her to stay means getting close enough to risk his heart in the process. Even though Gunnar makes small-town life seem a little sweeter, Andie has to decide if she’s ready to turn her world upside down and give up big-city life. One thing’s for sure—it’s a very sticky situation. 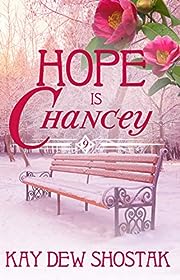 It’s a new year in Chancey, and hope abounds. Carolina hopes her daughter, Savannah, will figure out what she’s doing after graduation, hopes her husband, Jackson, working from home won’t drive her crazy, and hopes being a grandma to her son Will’s new baby will be as fun as everyone says. Her hopes for the rest of the town, however, are less than optimistic. Is Shannon pregnant? Is Peter the father? If he is, what will that mean for his engagement to Delaney? Speaking of engagements, is former wallflower Susan serious about marrying movie star Silas? And then there’s the special election to worry about. Missus and Laney both hope they’ll be elected mayor. Don’t say you heard it here, but most of Chancey hopes someone else runs… 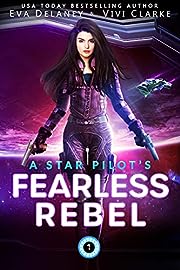 Pilot, smuggler, badass—these are what I know . . . until I end up trapped in an itty bitty space ship with five maddeningly tempting men who want to break down all my walls.

I have to remember we’re just crew mates.

It doesn’t matter how good these five men look or how close we’re living together on this small ship.

We’re on a mission, and there’s no room for emotions to screw it up.

Besides, one of them is my ex. So what if he refuses to wear a shirt or keeps giving me mischievous looks? He broke my heart once already.

Getting close to any of them would ruin me and doom a mission that could save the galaxy from centuries of war. 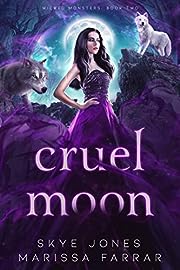 One girl, five monsters, one hell of a ride.
Aisha was reduced to nothing but a blood serf in the Citadel, until wolf shifters offered her a chance to escape.

Though she tries to resist her new captors, the muscular, tattooed shifters soon break her down.

But everything comes at a price.

With a vampire and a gargoyle on her trail, and wolves holding her hostage, Aisha learns who—or what—she really is. 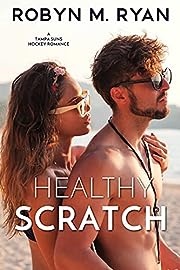 He wants out of the friend zone…she doesn’t believe in happily ever after.

Relationships are not in Lauren Gentry’s playbook. The only kind she’s willing to consider are friends-with-benefits and even a red-hot and sexy hockey player like Dave Martin isn’t going to change that. Right? When those chocolate brown eyes threaten to melt her defenses she has to remind herself that demons from her past could rise up at any moment. Which is going to be pretty hard to do, since she loses herself every time they touch. Dave used to love the benefits that came easily to professional athletes; especially when they were in the form of puck bunnies who only wanted one night.

But when he meets the pint-sized girl with bewitching green eyes and sun-streaked auburn hair his outlook suddenly changes. He wants forever with Lauren. Now he just has to convince her. Can Lauren risk everything for the man she’s secretly been falling for? Or will her past stop her from taking a chance on love? 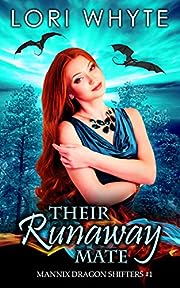 Jasmine is just an ordinary girl in an extraordinary world. She bakes, she loves her aunt, and she has vivid nightmares about dragons. So, when she is selected to be “sacrificed” to the beasts, she does the only thing she can… she runs.

She runs and runs… straight into the heart of dragon country. How could she not have known?

And now she is being pursued by two of the creatures…

Except they really don’t seem like “creatures” at all. Particularly when they take their human form. They are sexy and muscled. They are full of heat. And the bastards promise to protect her.

How is she supposed to resist all that?

A Lesson in Trust and Hope: A Historical Western Romance Book 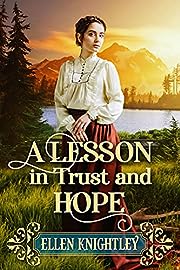 Carlie Ellis had never thought of leaving her hometown, and by doing so, hindering her relationship with her parents. Still, starting a family and a new life in New York had brought her so much happiness, she wouldn’t have it any other way. Yet Carlie’s bliss would come to an abrupt end, after losing her husband suddenly. Left with no other option, there was only one place for her and her daughter, Josie, to return to; her family home. Amid mourning and reconciling with her parents, Carlie cannot even begin to think about the future, let alone finding love again.

Conscious of Carlie’s unfortunate situation upon her return in Helena’s Wallow, Sheriff Alan Lansky knows that courting her would be entirely out of line. When the urgent case of her daughter’s kidnapping falls in his hands, Alan puts his feelings aside and joins forces with Carlie to rescue Josie. Together they will need to beat the odds and uncover past secrets. But just when Alan thinks they are getting closer to finding Josie, somehow her captors always seem to be two steps ahead.

If only he could solve the case in time, bringing everyone out to the other side unharmed…

A series of tragic events will become the reason Carlie and Alan’s paths will begin to entwine more than either of them anticipated. Will they get to explore their emotions, or is the unveiling of hidden truths going to turn them both into victims of fate? 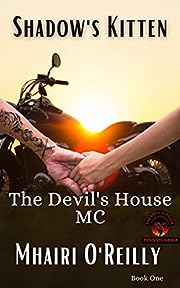 As the youngest president of “The Devil’s House MC.” Jay Kelley, aka Shadow, has a lot on his shoulders. He needs to focus on rebuilding the club the former members destroyed and new problems with a rival club. But one day, the only woman he has ever loved walks back into his life. Shadow will do anything to keep her with him and safe from the danger she finds herself in.

Mary James has returned to her hometown to hide from a man who tried to kidnap her. Here she has friends who can help her, one of them being the man Mary loves even after almost five years. But unfortunately, Jay made a mistake that caused her to run all those years ago. Can she forgive him? And if so, is there a place for Mary in his life and his club?

Puppy Training Books for Beginners: Puppy Tricks, Commands and Games for Beginners + Forget About the Naughty Puppy (The Perfect Dog) 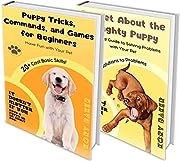 ?Do you want a puppy and want it to be exceptionally trained?
?Or, is your dog a problem, and you’re eager to find the best training methods?

Disciplining your four-legged friend is by no means an easy task. But having a trained dog by your side is any pet owner’s dream.
So, what if you didn’t have to spend your days cleaning up after your puppy or trying method after method training your problem dog?

Here’s a relatable and practical approach to a serious topic!
In turn, this engaging book allows you to easily and swiftly train your pup or teach your old dog new tricks.
Surprise your friends with the 6 cool tricks your dog can perform – or give this book as a gift so that they can see for themselves!

Stop stressing and add this easy-to-read book that lays out the necessary and effective steps to effortless training like no other. You’ll bond with the obedient, loyal, and loving puppy you always wanted.

Specifically, you’ll unlock these essential answers:
?The grand introduction: Everything there is to know about introducing your dog to the world and your loved ones.
?Eliminating problems: How to stop all those pesky bad habits from forming and how to get rid of them.
?Commands: Easy to follow guides and instructions for teaching your dog basic commands.

?The proper all-in-one guide for raising and re-training the dog of your dream!
?It doesn’t have to be time-consuming or harsh!

Hello World!: Greetings from all around the World! 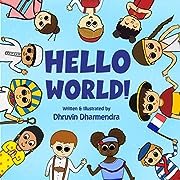 Come! Watch your little ones learn how to say “Hello” in eleven different languages from around the world. This illustrated educational book celebrates children from eleven multicultural countries and is a great introduction to the joy of language in early childhood. 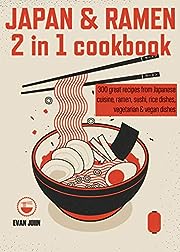 The Japanese have one of the highest life expectancies in the world, thanks in part to Japanese cuisine. The outstanding keywords in Japanese food culture are health and aesthetics. Because of for the Japanese, eating is not just an intake of food, but a traditional ritual.

Find out why Japanese cuisine is so healthy and get an insight into:

Discover the multifaceted Japanese cuisine with all its culinary specialties, idiosyncrasies and specialties.

And much more. Let yourself be surprised 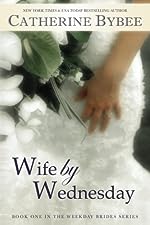 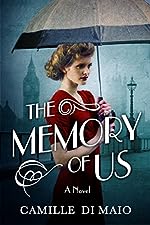 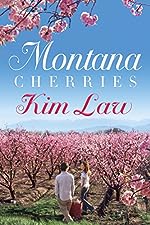 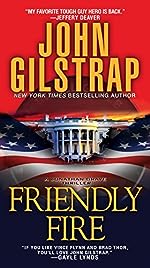 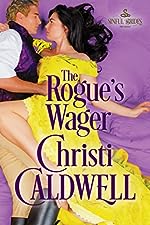 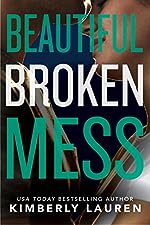 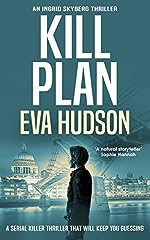 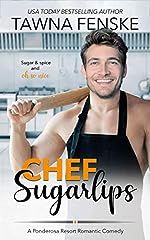 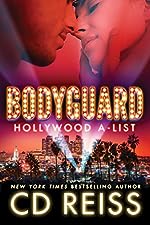 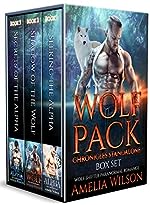 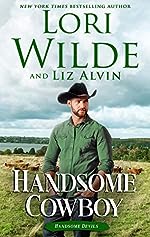 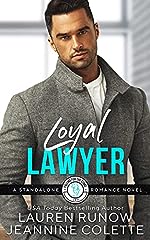 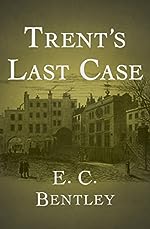 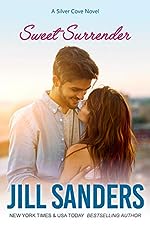 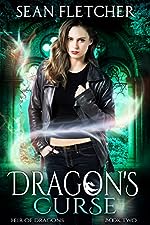