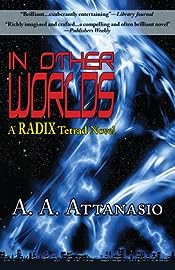 Phoenix Pick’s free eBook for September is A. A. Attanasio’s “In Other Worlds”. This is the second book in the highly acclaimed Radix Tetrad though it stands alone and is not a sequel. The Coupon code for September (good from now through September 30th) is 9991484 and the book is available in their online catalogue at www.PPickings.com.

Then, 130 billion years later, when all of spacetime is collapsing into the vast nothingness of the cosmic black hole, Carl Schirmer is remade from the remnants of his light. He is reborn in time’s last world, the strangest of all—the Werld.

There, Carl discovers the Foke, nomadic humans who travel among the floating islands of the Werld. Among them he finds the beautiful Evoë, and their life together is blissful in this kingdom that knows no aging or disease. But it is cut brutally short when Evoë is captured by the zotl, a spidery intelligence who hunt the Foke and eat them in an excruciating fashion. In order to save her life, Carl must return to Earth—130 billion years earlier—where he is shocked to discover that the Earth he’s come back to is not the one he left.

Can he meet the harsh demands of his task before the zotl find him and begin ravishing the Earth?